The Sunfish, including the Mediterranean Sunfish, or Mola mola, is the heaviest bone fish in the world. This fish can reach an average weight of 1000 kilograms, although there are records of some specimens weighing more than 2500 kg.

The Mola Mola fish (scientific name) has physical characteristics that make it very interesting. Its flat body on its sides, when the fish extends its fins, reaches the same height as long. , The Mediterranean moon can measure up to 3.3 meters long.

The skin is thick and without scales, a layer of something brat covers it and the texture of the skin is similar to the same type of sandpaper as in sharks. The Mediterranean moonfish can be found brown, gray and in some cases silver gray. The part of the belly is usually white, sometimes they have white spots on the dorsal fins.

Their diet consists essentially of gelatinous zooplankton, jellyfish, small fish or eel larvae. This fish consumes large amounts of food because it needs to maintain size because its diet is low in nutrients.

In relation to reproduction, the females of the sunfish have the capacity to produce 300 million eggs each with a size of 13 millimeters, surpassing with this amount any vertebrate. The eggs are fertilized the moment they reach the water.

They are solitary fish, they go to the surface of the water to sunbathe and in this way regulate the temperature of their body. although they are also lumpy of parasites by seagulls and other seabirds at that time.

Video of our partner @SergioBull

WHERE AND HOW DO SUNFISH LIVE?

Sunfish were discovered by a team of American biologists, The depth at which the moonfish lives is in waters 40 to 400 meters deep, is classified as a cosmopolitan fish that has the ability to live in warm waters, it is also They distribute in tropical temperate zones both in the Atlantic Ocean and in the Pacific.

It is important that the water is above 12oC since if they swim in waters below that temperature they can get disoriented and could even die.

They are abundant on the coasts of Cuba, but they can also be found in southern California, near Indonesia, south of New Zealand, in the British Isles, in the African Coast and in the Mediterranean Sea, which is why we can enjoy them every season. 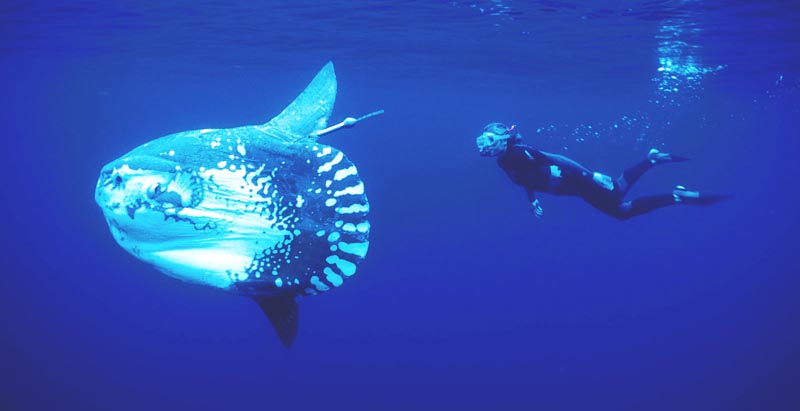 The places where moonfish live are the depths of coral reefs or in areas with algae, they also live in the open sea.

Moonfish do not have many predators, but sometimes the killer whales, sharks or sea lions approach to attack them; the only way they have to defend themselves is by swimming to deeper waters so that predators do not reach them. Another problem that worries although it is not so serious is that they are accidentally hunted by humans when they fall into fishing nets. Although in some regions they are also hunted for the purpose of selling their meat.

HOW LONG DO SUNFISH LIVE?

The average life expectancy of the Sunfish is still unknown when it lives freely in its natural environment. However, it is known that these fish reach a maximum of 10 years of age when they live in captivity, which indicates that they will probably live less freely. And it is that the majority of animals reach more advanced ages when they are in captivity than when they live in the wild, thanks to the fact that they do not have natural predators and they also have correct food and veterinary care in case they are necessary.

If you want to see the Mediterranean Sunfish, take a tour of our diving center in Estepona or write us! Sometimes we are lucky to see them walking or sunbathing off the coast of Estpeona, and we do not need to get too far from the coast and to cross the Strait of Gibraltar to enter the Mediterranean or leave it in its annual migration.

Diving in the SPM Nortomra – A wreck in 30m deep